And are built upon the foundation of the apostles and prophets, Jesus Christ himself being the chief corner stone;
Ephesians 2:20

We believe the Bible is the perfect, inspired, infallible, Word of the One true and living God – The Lord Jesus Christ. We believe that He has watched over and preserved His unchanging Word from the beginning even unto these present modern times. His Word is Truth without error and it must be spiritually given, by Divine Revelation.

Without Revelation it is impossible to know and please Him according to Hebrews 11.

THERE IS ONLY ONE GOD. HE IS THE HOLY SPIRIT. THAT GOD BECAME MAN.

We believe that there is One God manifested in Jesus Christ, in whom the fullness of the Godhead dwelt bodily. We believe that this Great, Eternal being created all Heaven and Earth and everything that there is.
In the Old Testament He revealed himself in many different manifestations to His people.

And in order to fulfill His supreme goal of Redemption, He became man. Yes, God took on the form of man and lived before us His own perfect example, taking our place that we might take His.

God who as Father, visited the Old Testament saints in many forms, became kin with man, taking on the very form of man and displayed true son-ship. God became Flesh and dwelt among us, paying the price of Redemption.

Now as He promised – “I will be with you, even IN YOU” – He comes to His elected, predestinated people to quicken His own life within and lead, guide, shape and mold His Bride into His very image and likeness. “That He might present to Himself a Glorious Church without spot or wrinkle.”

We believe that between the First and Second coming of the Lord Jesus, that God has been calling a people from among the Gentiles for His name through Seven Church Ages – Revelation chapters 2 & 3.

A PROPHET TO FORERUN HIS SECOND COMING

As spoken by the Lord Jesus in Matthew chapter 10, this prophet would come in the Spirit of Elijah. He would according to Malachi 4:5 & 6 turn the hearts of a people to the original faith that was established by the Holy Spirit in the book of Acts. This Elijah ministry was fulfilled through the ministry of William Marrion Branham.

YOU MUST BE BORN AGAIN

We believe that all men are born in sin and shaped in iniquity, come to the world speaking lies. But that the Blood of the Lord Jesus was shed to make a way that the sinner could be thoroughly purged of that sinful nature. We believe that for the salvation of lost and sinful men, a genuine experience of the New Birth by the Holy Spirit, through faith in our Lord Jesus Christ, is absolutely essential.

BIRTH, MINISTRY, DEATH AND RESURRECTION OF THE LORD JESUS

We believe in the Deity and Immaculate Conception and Virgin birth of our Lord Jesus Christ. That God created His own body in the womb of Mary by the Spoken Word. He died upon Calvary’s Cross as a substitutionary sacrifice for the sin of the world. We believe that the work of Calvary has completely Delivered the believer from Sin and from Sickness. All Sickness came as a result of Sin.

We Believe that The Lord Jesus Christ arose from the dead, and preached to the believers for 40 days till He was taken up into Heaven leaving them a promise that He would Return as the Comforter and be with them even in them.

We Believe that He would reconcile all those who were in Him before the foundation of the world, predestinated to be conformed to the Image of Jesus Christ. A people who are word of His Word, nature of His Nature, life of His Life, character of His Character – A perfect reflection of Him.

We believe in the general resurrection of all those who died in Christ to preceed the changing of the bodies of those who are alive and remain. We shall not all sleep, but we shall ALL BE CHANGED, in a moment in the twinkling of an eye. We believe that the Rapture of the Bride of the Lord Jesus Christ is in 3 stages according to Thessalonians – The Lord Himself shall descend with a Shout, a Voice and a Trump.

THE RETURN OF THE LORD JESUS

We believe that the Lord Jesus Christ Returns as He said in Luke 17:30 – Even Thus shall it be in the day when the Son of Man is REVEALED. The Lord Jesus comes again, but the world would not see Him. He would APPEAR to them whose eyes have been washed and opened to recognize His unchanging Presence. Through the last day message of Malachi 4, He would: 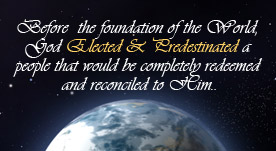 We believe in Election and Predestination, that God foreknew all those that are His and placed their names on the Lamb’s Book of Life BEFORE the foundation of the world.

That knowing the end from the beginning He has, “Gone to prepare a place for us.” Knowing all that would be present with Him at the end of the ages, having overcome the world, He has given us a WORD OF PROMISE (inspired, written and preserved for those who are the heirs of righteousness) to come to, to feed upon and to grow into the stature of the fullness of the Image of Christ Jesus our Lord.